Khorne clearly owns my soul. I'm working on a Unification-Era project, and decide to add some of the Emperor's foes, gene-bulked techno-berserkers. And then accidentally manage to make new models for my Daemonkin Army. Ah well! Here we have my first three three frothing mad berserkers. I'm no longer clear if they're from pre-Unity Terra, or the Khornate hoards of the 41st Millennium, or from Angron's pit-fighting pals in Nuceria: but they're definitely not just Age of Sigmar Khornate characters any more. 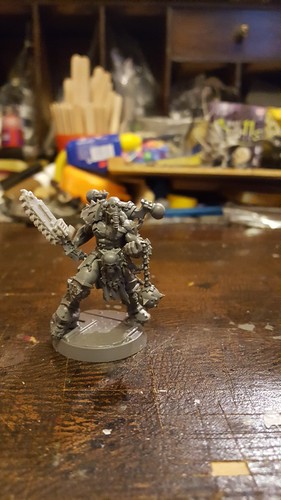 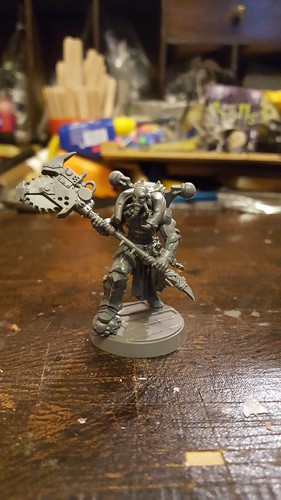 And this final dude is probably my counts-as Kharn, if I ever want to run him: 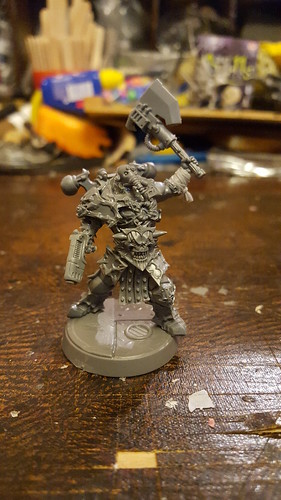 Posted by Mitey Heroes at 10:04 No comments: 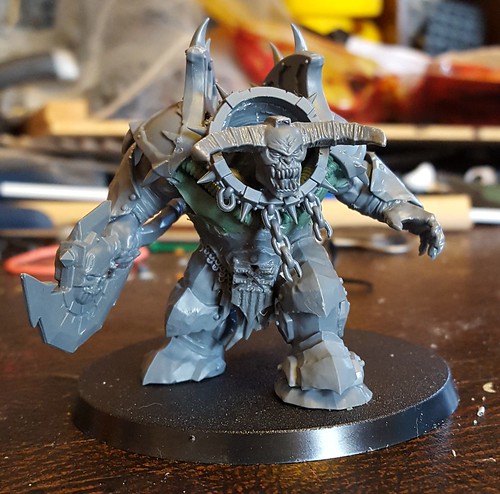 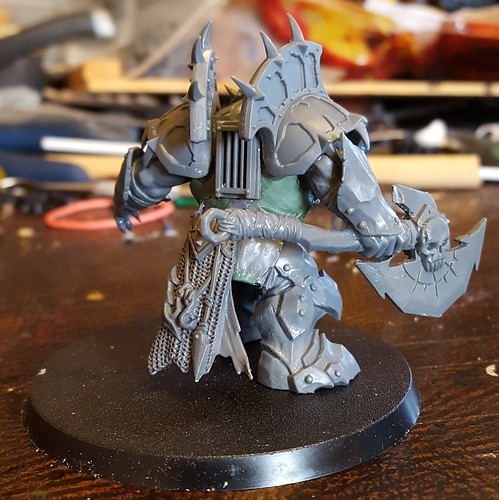 Posted by Mitey Heroes at 21:17 No comments: Posted by Mitey Heroes at 11:53 No comments:

The cheapest Blood Host is a Slaughtercult plus a standard Helbrute. So if I want to get a Blood Host into a 500pts battle, a Helbrute seems a good choice! As I had Dark Vengeance sitting around, this was a quick-and-dirty addition to the force. This model really wasn't modified much. One leg was sawn off at the hip, and stuck back on in a slightly more dynamic running pose. The head is from a jugger. But that's it. Was tempted to modify the arms, but it all seemed like far too much bother. If I make a second one I will! Posted by Mitey Heroes at 12:23 No comments:

My second possessed squad for Hans Kho'ren's Skull Takers. I had so much fun building the 1st squad, that I wanted more! Also, this enables me to take 2 Blood Hosts, which seems an amazing idea for maximising Blood Tithe points.

These guys have the Roman-style shoulder pads from the Marauders kit. Mostly because I'd run out of the ones with the spikes... I think that they still look gladiatorial though, so still fit with the theme. I think that this champion is possibly my favourite non-HQ model I've made so far. The Wrathmonger legs, horn-swapped head, his mini-daemon-prince pose... I even like his trophy rack more than the ones on other champions!
Posted by Mitey Heroes at 12:12 No comments:

Hans Kho'ren has always preached that the aim of a Space Marine is to emulate their Primarch. His loyal apothecary, Kagh Bo'orchu, is essential for this. It is Kagh who implants new members of the Skull Takers with the gene-seed and blood of their Primarch to turn them into true World Eaters; Kagh who was one of the first apothecaries to experiment with the Butchers' Nails; and Kagh who, after Angron's apotheosis, studied with Lorgar's Word Bearers to discover the secrets of the Possessed. Kagh's drive to become more like Angron has taken him far from humanity, but his journey is not yet over. Kagh Bo'orchu's right arm still bears the twisted Chaotic remains of his Narthecium, constantly in flux and emitting new spikes as required. His armour is brass, forged to mimic the Armour of Mars worn by Angron, showing he is an important figure in the Skull Takers. On his left shoulder he bears a gladiatorial shoulder pad, in memory of Angron's past; his right shoulder pad is a snarling skull, symbol of Hans Kho'ren's Skull Takers. His helmet is pale and horned, like all in the Skull Takers, in honour of their daemonic patron. Posted by Mitey Heroes at 21:15 No comments: